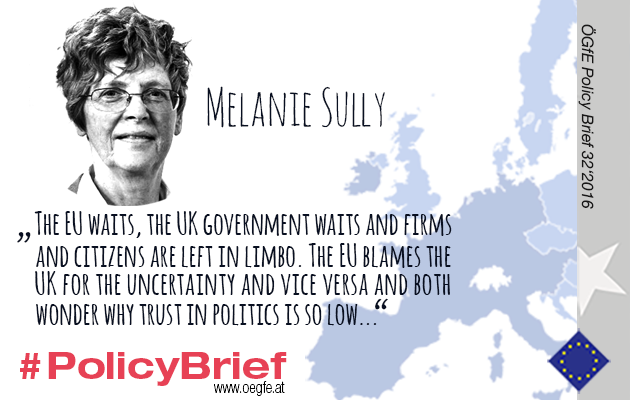 Half a year after the referendum on UK membership, little tangible has emerged aside from a flow of platitudes, leaked memos and the odd speech. “Brexit is Brexit” and “out is out” hardly enlighten the millions in the EU wondering how to manage their future. The European Union was taken by surprise and there is little consensus on how to grapple with the post-Brexit era in practice.

The EU conveniently insists on the UK triggering Article 50 before discussing anything. This looks more like an excuse for inaction than a strategy. In future the EU needs to react more decisively to such shake-ups and presently could sketch out a plan for the millions of citizens anxiously waiting for what seems Godot.

Meanwhile as this apparent stalemate threatens to endure, the EU could encourage projects at bilateral level between cities and the regions to maintain links between the United Kingdom and the rest of the European Union. This would help those most pro-European in the UK who feel abandoned by key decision-makers.

Education as Medicine against Populism

Just supposing, for the sake of argument, the referendum vote had gone in favour of staying in the European Union, where would we be now? The EU would have gloated that even the British are pro-Europe. Half a year on we would still be waiting for politicians to hammer out the details of changes in social security rights, restrictions on in-work benefits and child allowances. The European Parliament had threatened to flex its muscles and some would certainly have found the concessions to the UK discriminatory and even against the treaties[1]. Many would have regretted voting Remain, there would be demands for a second referendum and UKIP would be riding high. Citizens would still be waiting for Godot.

And for precisely that reason many voted “Out”. Here was a once in a lifetime chance to leave. Could the EU be trusted to fulfil its promises? Could it work fast enough to have any impact on reducing immigration to the UK? Of course not as we saw in the messy negotiations recently with Canada. In the weeks before the referendum it was clear Brexit was gaining momentum. But unlike the Scottish referendum there could be no extra last minute effort to woo voters. Such moves would have required the approval of all Member States[2]. Brexit was a disaster waiting to happen and the EU was a passive observer.

Brexit was a disaster waiting to happen and the EU was a passive observer.

The EU sees Brexit as a British problem, “you voted out so go tout de suite” is the stock phrase. But this is a European problem the EU dodges at its own peril.

The Brexit vote came mostly from youth without further education and older citizens saddened by what they see as a lost world of the past. This was not just imperial nostalgia; the 1950s after all laid the foundations for the welfare state with full employment. In addition to the many youth projects for university educated youngsters the EU could offer something for those outside the educational system and for senior citizens. They cannot all be damned as xenophobic racists exploited by an evil press. And even if that were true, it is no answer. As Tony Blair once said, the way forward is “education, education, education”. It is only regrettable that this winning election slogan mutated into war and more war.

A majority for Remain was recorded in Northern Ireland, Scotland, London, the big cities and Gibraltar. Donald Tusk has said though that the choice is between “hard Brexit or no Brexit”[3]. The former would damage exactly those regions and cities that were for the EU.

Connecting once again with its citizens is a perennial aim of the European Union. It has a chance now to do something by offering to engage with the UK government before Article 50 is triggered. This would help those who have mostly taken advantage of mobility and now stare into an uncertain future. The EU could gain some respect for much wanted leadership and would be acting in the European spirit.

The EU waits, the UK government waits and firms and citizens are left in limbo. The EU blames the UK for the uncertainty and vice versa and both wonder why trust in politics is so low.

Chief Brexit negotiator for the European Parliament, Guy Verhofstadt, is sympathetic to a form of “associate citizenship” for Brits. Whilst the European Council response to a plea from UK parliamentarians to soften up on discussing rights for EU citizens was, “we assumed that one of the main reasons for the vote for Brexit was the rejection of the free movement of people”.[4] This is a simplified analysis and polls have shown voters see access to the single market as more important than immigration, something supported by Theresa May when she was a candidate for the Tory leadership.[5] At the party conference in Autumn however a hard Brexit was her preference and immigration a top priority. A recent Ipsos Mori poll showed that many voters are unhappy with the handling of Brexit by the British government. For Remainers there is no plan, for the Brexiters no action. Until the Courts sort out the legal tangle on triggering Article 50, the UK is in an impasse. The EU waits, the UK government waits and firms and citizens are left in limbo. The EU blames the UK for the uncertainty and vice versa and both wonder why trust in politics is so low.

Even once the negotiations get underway the uncertainty will continue. Too diverse and contradictory are the priorities of the 27. Each Member State will link its own interests to other unrelated points in a complex web of Junktim. There is no clear plan from the EU on how it will proceed even if Article 50 is triggered next March. The European Commission’s negotiator Michel Barnier recently placed a deadline for conclusion of Brexit by Autumn 2018. Whether that is feasible or in conformity with Article 50 is unclear.

Brexit could drag on if the UK parliament seeks more guidance from the EU before pushing the Article 50 button. The idea that by then the British economy will be so weak, voters will be begging to come back is illusory. The populist post-fact World means that not Brexit will be blamed for the woes of millions but the lack of it. The Brexiters will say, “look a year on we are still in the EU, no wonder we are not free and prosperous”.

In addition to the conduit of information from the EU down to the citizens, there should also be a receptive circle of EU leaders listening to what the people are saying.

There is much homework for the EU to do in the wake of Brexit and a tentative start was made with the Bratislava Declaration in September 2016[6]: “we need to improve communication with each other – among Member States, with EU institutions, but most importantly with our citizens”. But this should be in the form of a dialogue. In addition to the conduit of information from the EU down to the citizens, there should also be a receptive circle of EU leaders listening to what the people are saying[7].

Cities Across the Divide

The hiatus in the relationship between the UK and the European Union is damaging to the spirit of mutual understanding. Above all right now more cross-border projects are needed until the exit process is clear and completed. These existed even before the European Economic Community was founded. Following the horrors of the Second World War many twinning projects and exchanges started between schools in Germany and Great Britain[8].

Today the Eurocities network[9] has shown the way with a pledge of support to UK cities to develop science, economics, innovation and excellence.[10] City leaders though are also critical of the way the EU works and would like to see reforms. An open letter of over hundred mayors in the network stated, “There is a growing disconnect between citizens and the EU institutions…We the city leaders can bridge this gap…we have our finger on the pulse of the local population, we know the people’s interests, concerns and visions”.[11] The EU operates though mostly with the 28 national governments rather than interacting with the cities. The network wants the European Commission to deal with the cities directly. As the Mayor of Ghent concluded, ”cities have proved again and again they can find solutions to problems which member states are bickering about for years. It is in the cities that the spirit of Europe is alive”.

The ties between the UK and the Europe did not begin with membership of the EU and do not subside when it leaves.

The ties between the UK and the Europe did not begin with membership of the EU and do not subside when it leaves. The EU treaty itself with Article 8 opens up a possibility: “The Union shall develop a special relationship with neighbouring countries, aiming to establish an area of prosperity and good neighbourliness, founded on the values of the Union and characterised by close and peaceful relations based on cooperation”. For this the “Union may conclude specific agreements with the countries concerned. These may contain reciprocal rights and obligations as well as the possibility of undertaking activities jointly”.[12] These are constructive ways forward to a new era between the EU and the United Kingdom.

For much of the half year since Brexit the EU has been in denial hiding behind Article 50. It has cited everything that is not possible reminding the UK of its obligations to pay into the budget but admonishing it for voicing concerns such as on the proposed European army. The UK government for its part has been pussyfooting around and has landed the country in a potential constitutional crisis.

As so often those suffering from the helplessness of leading decision-makers are the citizens not only in the UK but throughout the EU.

The EU needs to:

So far Brexit has threatened to be a tragicomedy akin to Samuel Beckett’s play where the key actors reflect:

The paralysis of the UK government on Brexit is all too clear; it does not need to be mirrored by the EU. Fear that the Union will disintegrate will not inspire. The EU has to proceed on the basis of hope. Millions are waiting.

[1] See the European Commission’s rebuff of the Austrian proposal to cut child benefits for those outside the country analogue to the UK deal of February 2016.

[8] https://www.bristol.gov.uk/museums-parks-sports-culture/hannover-and-bristol Twinning projects also existed with other countries, for example between the UK and France.

The views expressed in this publication are those of the author and not necessarily those of the Austrian Society of European Politics or the organisation for which the author works. 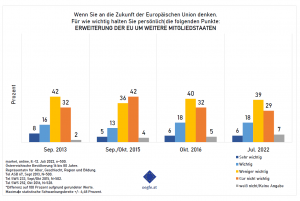